As part of its 90-year celebration in 2018, NIBA developed an interactive history presentation. Click the image below to view. 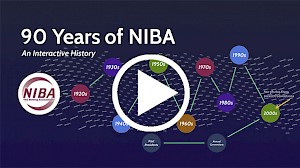 For its 80th celebration in 2008, NIBA created a printed history brochure.

A Quick History of NIBA

2007
The association moved their headquarters to Milwaukee, Wisconsin.

2001
NIBA changes their name to NIBA - The Belting Association to reflect the increasingly global nature of the industry and the association.

1999
The association launches their first edition of the website.

1993
The association opened a new category of membership opened for international members.

1982
“Conference booths” are created at the national meeting to improve communication between distributors and manufacturing representatives. This concept significantly reduced inter-organization conflict.

1973
On September 17, 1973, NILA directors upon petition form its Flat Belt Drive Division opened its membership rolls to fabricators and/or slitters of industrial belting of all types.

1963
Name of Leather Belting Division of the Association was changed to Flat Belt Drive Division.

1959
On December 4, 1959, the Headquarters Office of the Association was closed in New York and moved to Pompano Beach, Florida

1947
The association established its own headquarters at 41 Park Row, New York and Mr. Rath among others, became an employee of the association.

1943
Manufacturers of mechanical leather packings were accepted into the membership of the Association under the name of Mechanical Leather Packing Division.

1939
American Leather Belting Association moved into the office of the Power Transmission Council at 63 Park Row, New York, and E. R. Rath of PTC was assigned to ALBA as its Executive Secretary.

1938
An extensive advertising program covering leather belting was contemplated and put into effect.

1936
Association incorporated under the laws of the State of New York with the name American Leather Belting Association.