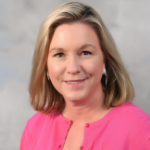 Kathy Nelson works to promote Kansas City sports locally and nationally with the goal of attracting, retaining and facilitating sports events and organizations.  She helps the bi-state region realize the economic, social and community-building benefits of sports.

Nelson has become an influential leader in Kansas City.  In recognition of her contribution, The Kansas City Star included Nelson on their 2020 list of the 50 Most Influential People in Kansas City Sports History, ranking her at #38 and making her one of only four women represented.